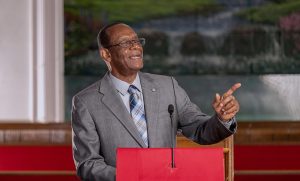 Reverend Johnny C. Owens, Jr., is the son of the late Deacon Johnnie C. Owens, a retired school principal and Margaret H. Owens, a retired Educator who resides in Savannah Georgia.  Owens received a B.A. in Business Administration from Morehouse College of Atlanta Georgia in 1975. He holds two Master’s Degrees: A Master of Divinity from the Interdenominational Theological Center of Atlanta Georgia, 1978, and a Master of Arts degree in Marriage, Family and Child Therapy from the California Family Studies Center of North Hollywood California, 1987, presently known as Phillips Graduate Institute.  He is a clinical member of the American Association of Marriage and Family Therapists.

He was licensed to preach in August of 1975 at the Saint John Baptist Church in Savannah Georgia during the tenure of the late Reverend Matthew S. Brown, Pastor Emeritus. Upon completion of seminary, he was ordained into the work of the Gospel ministry at the Antioch Baptist Church North of Atlanta Georgia in December 1977 by the Late Reverend Dr. Cameron Madison Alexander.

Throughout his 21 year ministry as a Chaplain to the US Army, he held various battalion, brigade, installation and chaplain pastor positions in Georgia, the Republic of Korea, Washington State, Hawaii, Oklahoma and South Carolina. Career highlights include serving as the Director of the Chaplain Family Life Center at Schoefield Barracks and Fort Shafter Hawaii. Following promotion to the rank of Lieutenant Colonel in August 1993, he became the Deputy Post Chaplain for Fort Sill, Oklahoma. In this capacity, he was responsible for supervising the professional training of 37 Chaplains and the religious programs for a military community of 42,000 soldiers, families, retirees and Department of Defense civilians.

Of notable mention, in addition to regular chaplain responsibilities as a Captain, Major and Lieutenant Colonel, he served as the Senior Pastor of the largest and most viable worship service in each of the six geographic locations assigned over a career that spans two decades.  These well attended Interdenominational services are the expressions of African American worship traditions on military bases, and meet the spiritual needs of people who are challenged to sing the Lord’s song in a strange and foreign land.

Retiring from active duty on March 31, 1999, Reverend Owens transitioned to civilian life and has served as the esteemed Senior Pastor of the Greenview First Baptist Church of Columbia, South Carolina, since August 8, 1999. As Pastor, he has facilitated a sense of stability, promoted unity and created a positive church-wide atmosphere. He functioned as an effective mentor for 5 ordained ministers who continue to excel in the local church and in a US Navy Chaplaincy position. Under his Bible based preaching and therapeutic approach for doing ministry, 430 persons were led to affiliate with the church.

He is married to the former Sandra Denise Riley, a retired National Board Certified Music Teacher. They have one son, Jaron C. Owens who is an analyst with the SC State Department of Education and is pursuing a career in Computer Software engineering.